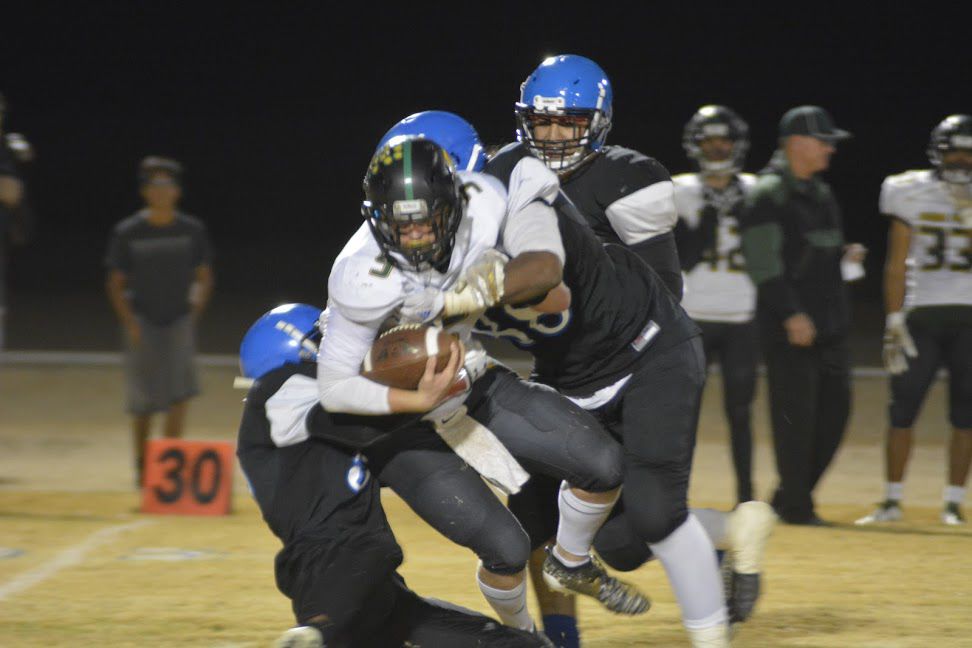 Ravens defenders No. 88 Zarias Rose and No. 56 Devin Byar bring down the Golden Eagles quarterback for a sack. 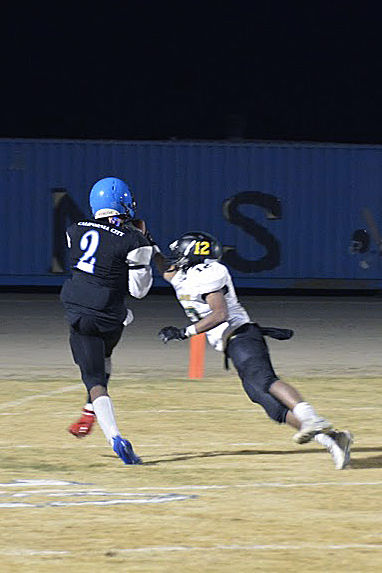 Ravens No. 2 Kwamain Ross pulls in a pass on the way to scoring a second touchdown in the first half. Ross had earlier rushed for a touchdown

Ravens defenders No. 88 Zarias Rose and No. 56 Devin Byar bring down the Golden Eagles quarterback for a sack.

Ravens No. 2 Kwamain Ross pulls in a pass on the way to scoring a second touchdown in the first half. Ross had earlier rushed for a touchdown

CALIFORNIA CITY – The second round of the Central Section CIF Les Schwab Football Championships went as a win for California City High School with plenty of yards and good practiced play on them. The Ravens defensive line gave protection and aggression against Sierra Pacific ending with an 18-6 victory.

There were no touchdowns in the first quarter, but No. 10 Jeremiah Neal started off the quarter with a good showing, making the right calls and finding the openings to push through for more than 30 yards.

As teams were beginning to get a feel for each other in the second quarter, CCHS began noticing Sierra’s defense could not hit hard enough and left openings. With the Ravens’ steadfast offense No. 2 Kwamain Ross rushes into the endzone, giving CCHS a 6-0 lead.

After this first touchdown Ross affected the whole second quarter as he continued to gain yards, taking a long pass from Neal and finds the endzone to pull the Ravens ahead 12-0. A turnover gave Sierra possession of the ball, only to lead to an exciting fumble recovery for CCHS, but with only a couple of seconds left in the second quarter, there was no time to capitalize on it.

In the locker room at halftime, Ross said defense was a more important factor than his two touchdowns.

“I think that our defense is our powerful value this game, our front line is executing well my running backs are blocking well for my quarterback so that he can get the ball off to me,” he said. “My quarterback is throwing the ball excellent tonight and we just executing tonight, we are just doing our job.”

The third quarter became tense as Sierra Pacific regained their morale during halftime and were on a mission to gain enough yards to score a touchdown. The defensive line of CCHS were able to stop the Golden Bears dead in their tracks, running down the quarterback for a sack with an aggressive play style that converted into serious pressure for the visitors,

Going into the fourth quarter, the pressure was on and gave ample room for back and forth fumbles. One moment it would be Sierra Pacific’s ball and the next Cal City’s. Each team scored touchdowns in the fourth as well. Contreras had his moment to shine when he caught an interception near the end of the game to seal the victory.

“We had a good week of practice, we’re playing well playing hard and it shows,” said Neal after the game.

He also reflected on the previous game that resulted in a loss.

“Yeah we were messing around and didn’t practice as well but this week we started to focus more,” said Neal. “We’re not perfect but we’re getting to where we need to be. We’ve just got to finish.”

The Ravens will face Orosi at home on Friday in the Central Section semi-finals, the game begins at 7 p.m. at CCHS, 8567 Raven Way.