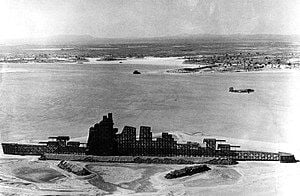 Muroc Maru officially known as AAF (Army Air Force) Temporary Building or Target T-799 was a replica of a Japanese Takao-class cruiser constructed on the floor of Rogers Dry Lake during World War II. The structure was used to train bomber pilots and bombardiers in techniques for attacking warships and remained in place until it was demolished due to safety concerns.

AAF Temporary Building T-799 was built during 1943 on the southern end of Rogers Dry Lake for the purpose of training United States Army Air Forces bomber pilots, navigators and bombardiers in bombing, strafing and the identification of warships including skip bombing techniques. The lakebed site was chosen for the construction of the training structure as the bright sand dunes which were sculpted gave the appearance of a wake around the ship creating an illusion of a vessel being at sea. Designed to mimic the size and appearance of a Takao-class heavy cruiser of the Imperial Japanese Navy, the structure was built from 4 by 4 lumber and chicken wire with tar paper covering the hull to complete the illusion of a solid, fully constructed warship; the cost of the building was around $35,819 which is equal to $567,341 in today's market. After completing the structure, the Army Air Force pilots assigned be trained at the nearby Muroc Army Airfield which is now Edwards Air Force Base who used the ship gave it the name Muroc after the location of the vessel and Maru being a common suffix for Japanese ship names. The structure was used for training until 1950 when it was declared a hazard to air navigation and disassembled following clearance of unexploded bombs and other devices.