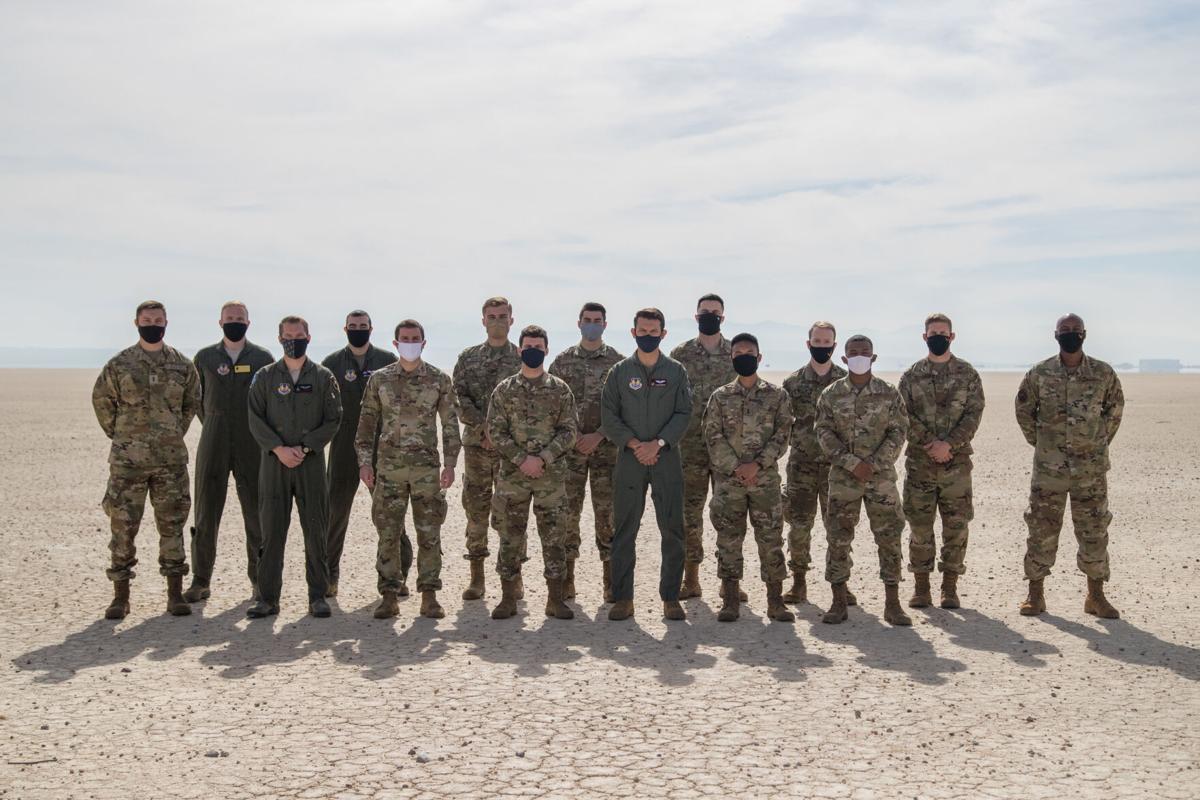 Airmen from Edwards Air Force Base, California, pose for a group photo on the Rogers Dry Lake Bed prior to their U.S. Space Force transfer ceremony, Feb. 11. 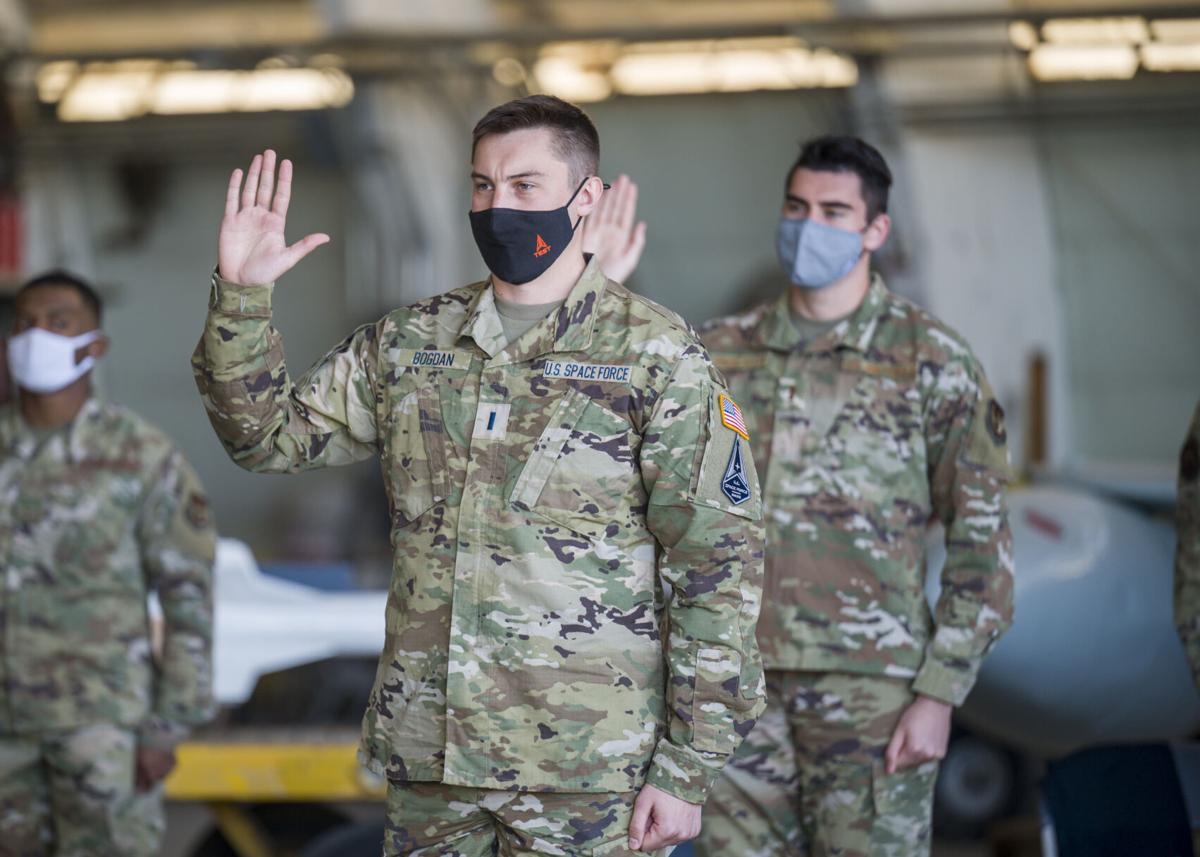 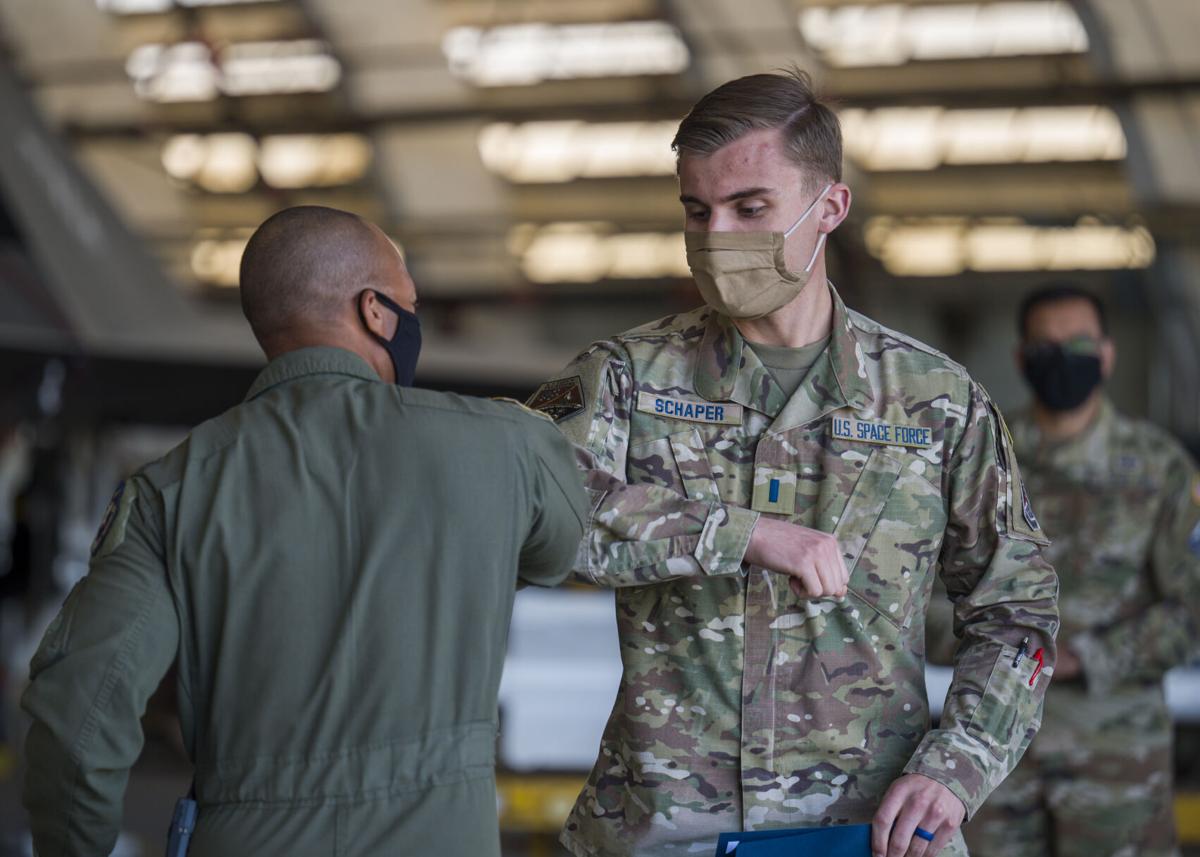 Airmen from Edwards Air Force Base, California, pose for a group photo on the Rogers Dry Lake Bed prior to their U.S. Space Force transfer ceremony, Feb. 11.

EDWARDS AFB — The 412th Test Wing hosted a ceremony for 17 Airmen who have transferred as Guardians in the Space Force at Edwards Air Force Base, California, Feb. 11.

The Airmen were assigned to the 412th TW as well as those assigned to different mission partners stationed at Edwards AFB. The ceremony took place in front of the historic Hangar 4305 where the first U.S. jet aircraft, the Bell P-59 Airacomet, was assembled and housed during developmental flight tests.

“It’s our ability to lean forward into the straps to explore new domains and we can have confidence in knowing that we do dominate the air ways, we dominate the seas, and we will, here, because of everything you all are about to embark on, dominate space,” said Col. Randel Gordon, 412th Test Wing Vice Commander. “Thank you for having me to be in the cradle of such a historical base, where we’ve made so many strides within our own atmosphere, to be sitting here among heroes who are going to make significant strides outside of our atmosphere.”

Edwards AFB, also referred to as the Center of the Aerospace Testing Universe, has been historically linked to the Nation’s aerospace and space efforts.

Edwards AFB’s historic highlights feature the breaking of the Sound Barrier by Gen. Chuck Yeager in 1947, the “X” planes of the 50s and 60s which eventually led to NASA’s Gemini and Apollo missions in the 60s and 70s. Legendary aviators and astronauts also saw flight time at Edwards including the Apollo 11 mission commander Neil Armstrong, the first man on the moon and also Test Pilot School graduate.

The Space Force is tasked with protecting U.S. and coalition forces interests in space and to deter aggression in, from and to space as well as to conduct space operations.

For 1st Lt. Craig Carlson, a Flight Test Engineer with the 412th Operations Group, 412th Test Wing, his foray into space started before he officially joined the Space Force.

“I’ve always been a space nerd, and the chance to use that passion in a professional setting is awesome,” said Carlson, originally from Boulder, Colorado. “I have a Master’s Degree in Space Systems Engineering and I’ve always wanted to get involved in the space community. Transferring into the USSF is a great way to do that.”

Besides transferring to the Space Force, Carlson was selected to attend the Space Test Fundamentals course at the Air Force Test Pilot School and also received an Education within Industry fellowship with a civilian launch provider to further strengthen his space career skillset.

Another future Space Test Fundamentals student, Capt. George Zeitler of Sunrise, Florida, said it was his father’s 20-year Coast Guard career that inspired him to join the military. But it was his membership in his high school’s rocketry team that spurned his interest in space.

“It is the foundation of my education and profession, past and now future,” said Zeitler, 15th Test Flight Detachment 2, 53rd Wing, Air Force Air Combat Command. “I was an Astronautical Engineering major at the Air Force Academy and have done work as a satellite engineer and orbital analyst. I enjoyed my time working with space systems as much as I do my time working Test & Evaluation. I hope to work some combination of the two in the future. Encouragement and advice from close friends and family also helped.”

In May 2020, active-duty Air Force personnel in specified “Organic Space” career fields were able to officially apply to transfer to the Space Force. The 13S (space operations) and 1C6 (space systems operations) Air Force Specialty Codes were identified as Organic Space career fields. Airmen in AFSCs common to the Air Force and Space Force such as cyber, acquisitions, engineers and intelligence may also apply to transfer.

Newton, originally from Watha, North Carolina, began his service with the Air Force in 2005. He said he felt that the Air Force offered him an opportunity to learn more about himself and to interact with people from around the world. Now as a Guardian in the Space Force, new challenges await him.

“This is a unique opportunity; a chance to get outside of my comfort zone and to lead in an unfamiliar territory,” Newton said.