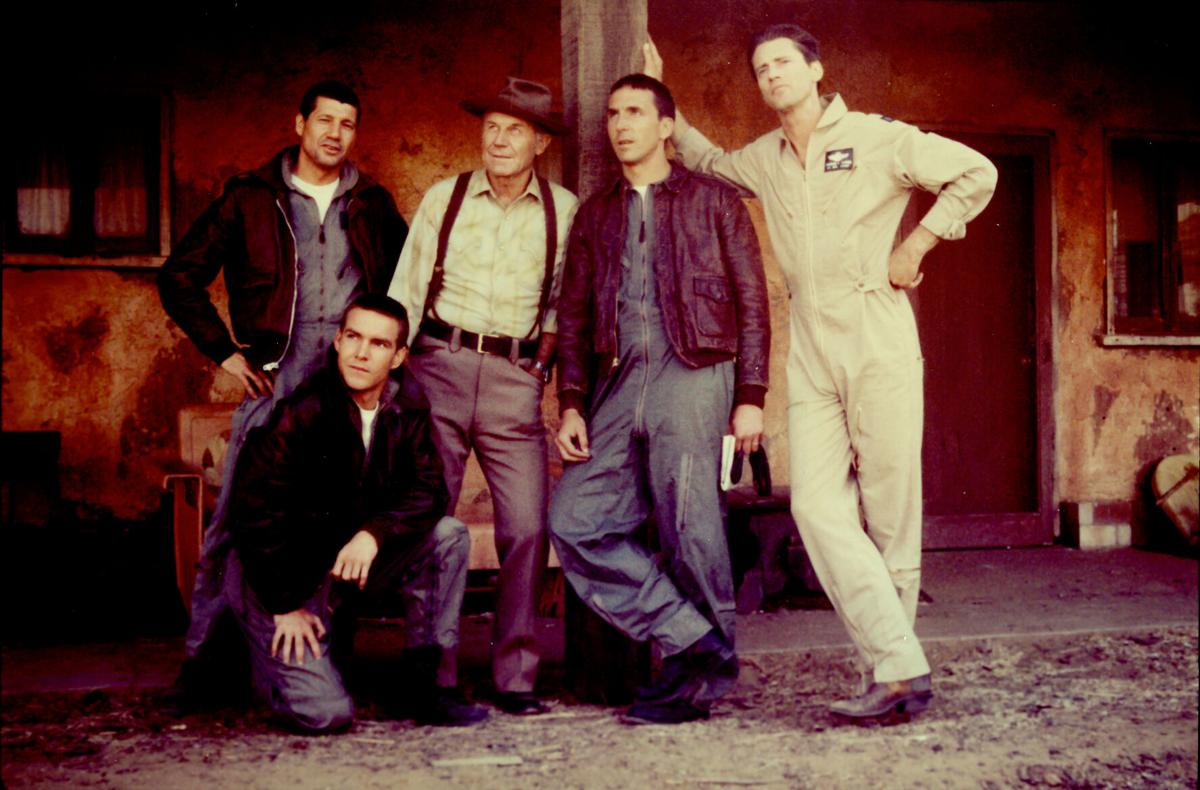 Brig. Gen. (retired) Chuck Yeager poses for a photo with the cast of the film "The Right Stuff" at Edwards Air Force Base in 1982. Yeager played the bartender "Fred" during a cameo appearance in the film. 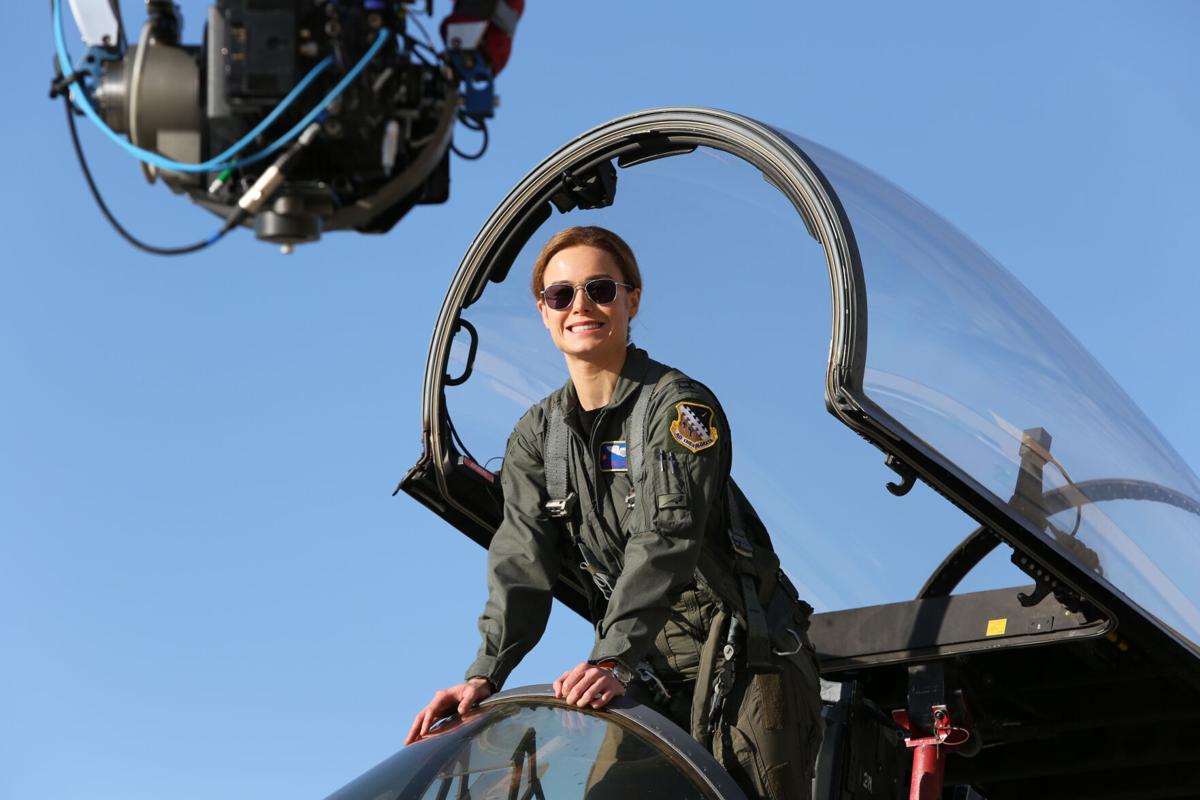 Actor Brie Larson poses for a photo during the filming of "Captain Marvel" at Edwards Air Force Base, California in 2018.

Brig. Gen. (retired) Chuck Yeager poses for a photo with the cast of the film "The Right Stuff" at Edwards Air Force Base in 1982. Yeager played the bartender "Fred" during a cameo appearance in the film.

Actor Brie Larson poses for a photo during the filming of "Captain Marvel" at Edwards Air Force Base, California in 2018.

EDWARDS AIR FORCE BASE — You may not know it, but Edwards Air Force Base is a movie star. Well, sort of… Sometimes Edwards AFB is like an extra in the background you have to squint to notice. In other instances, Edwards AFB is a familiar face you slowly recognize with a “Hey, that’s Edwards.” Then there’s are occasions where Edwards AFB - the base, the myth, the legend is front and center no doubt about it.

The home of the Air Force Test Center, 412th Test Wing  and the Air Force Test Pilot School, as well as NASA’s Armstrong Flight Research Center, may not have seemed destined for moviedom when it started out as a water stop for the Santa Fe Railroad in 1882.

In fact, the first time the military noticed the patch of land that would become Edwards AFB it was decided that it would make a great place to bomb. Not the typical path to the bright lights of Hollywood.

It in was in 1932, that Gen. Henry H. “Hap” Arnold, realizing that the increasing population of Riverside County left him with few options for a bombing range, began the process of acquiring land for just that purpose. In 1935 bombers from March Field flew to the then Mohave Field plastering the desert from 10,000 feet.

However, years before the desert was cratered by Gen. Arnolds’ B-18 Bolo bombers, Hollywood saw in this rugged patch of Kern County a location that could double for the Middle East or New Mexico as it began shooting silent movies such as "The Ten Commandments," "Ben Hur and "The Santa Fe Trail" in the early 1920s.

It was exactly the wide-open and unsettled nature of the area, the natural landing strip of the dry lakebed, as well as its proximity to the Los Angeles aerospace industry, that heralded the rise of Muroc Army Air Field to eventually become Edwards AFB in 1947.

As Edwards AFB grew, so did Hollywood’s recognition that something special was happening just north of Tinseltown. It was during its decades-long evolution from obscurity to the Center of the Aerospace Testing Universe that Hollywood realized those hangars in the High Desert (that look a lot like studio soundstages) and the pilots making history on daily basis in cutting-edge aircraft might have an interesting story to tell.

It was after World War II the relationship between Edwards AFB and Hollywood started to gain altitude.  Stars such as John Wayne, William Holden and Charles Bronson starred in movies such as "Toward the Unknown," "X-15," "Jet Pilot," "Thundering Jets," "24-Hour Alert" and "Towards 60,000 Feet."

However, it wasn’t until 1983 that Hollywood gave Edwards AFB the top billing it deserved when it shot scenes for The Right Stuff on location. The Academy Award winning movie, based on Tom’s Wolf’s same-titled book, about the space race with the Soviet Union, the seven Project Mercury astronauts and the world of test pilots, was a critical hit that firmly stamped Edwards AFB as a star.

It wasn’t soon afterwards, that Hollywood switched from non-fiction to science fiction when it came to Edwards AFB. "Deep Impact" and "Armageddon" both shot scenes locally in 1998. Three installments of the Transformers franchise directed by Michael Bay took out permits to shoot on base including the initial entry, "Transformers" followed by "Revenge of the Fallen" and finally "Dark of the Moon" leapfrogging the first two "Iron Man" movies which also had scenes shot at

Then "The Man of Steel" arrived shortly afterward followed with a return to reality when Ryan Gossling portrayed Neil Armstrong in "First Man." But it was back to fantasy, most would agree, when Brie Larson as Capt. Marvel portrayed an Air Force test pilot with out-of-this-world super powers.

Edwards AFB’s next role? Hard to tell. But the with popularity of superheroes and supervillains, it seems likely to be cast in a supporting role of someone (or something) with superpowers. However, a reality check that is out-of-this-world arrives this fall when Disney+ premiers its eight-part series "The Right Stuff." A reboot of the iconic Tom Wolfe non-fiction book.