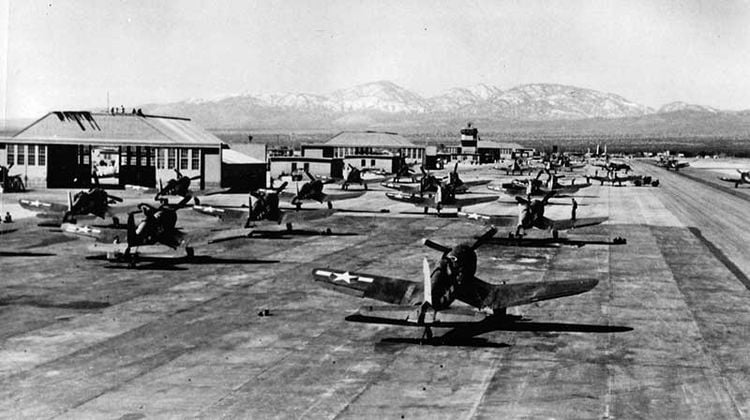 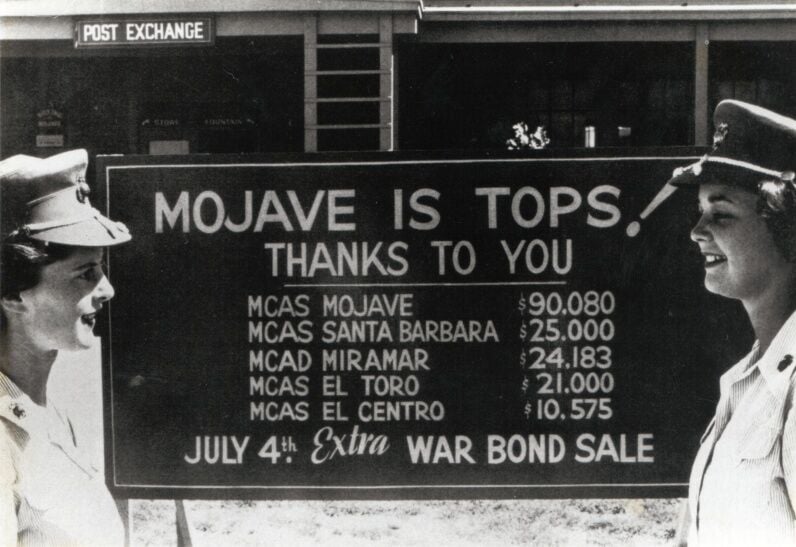 Many people travel through and around the unincorporated town of Mojave; whether they work, live, visit or travel along the stretch of highway known as State Route 58 and pass the Mojave Air and Space Port but, has anyone ever wondered what the airport was in the past? Well, while researching the high desert area, I decided to take a look at the past and travel back in time. Here’s what I found according to Wikipedia, M. L. Shettle, Justin Ruhge and other resources.

In the early 1930’s, Kern County established an airport 1 ½ miles east of Mojave; in 1935, the airfield consisted of 2 dirt runways and 1 oiled runway with no services or fueling available. The CAA selected this airport to be modernized for National Defense during 1941; Kern County accepted the plan and a provision that the airport could be taken over by the military in the event of a war. Later that year, work began on two 4,500 x 150-foot asphalt runways, taxiways and a small parking lot.

In March of 1942, the Marines received permission from the Interdepartmental Air Traffic Control Board to develop air stations at Mojave and Rosamond which is 14 miles to the south; with the CAA Project at Mojave already underway, the Rosamond Project was put on hold and resources concentrated on Mojave. Lt. Col. John Holmberg who was the bases prospective Commanding Officer at the time and his staff arrived in Oct. 1942 to organize the station; offices were set up in the Mojave Grammer School Gymnasium because there were no buildings completed; the station was commissioned on January 1, 1943 even though many of the facilities were still incomplete, Marine Base Defense Air Group (MBDAG) was set up the same day as well as VMF-225 and VMSB-236. The stations 150-foot-wide runways proved to be a problem from the get go; inexperienced pilots lost control on landing and leaving the runway and many aircrafts were damaged beyond repair; fortunately, no serious injuries occurred.

The Marine Air Station at Mojave became one of the training centers of Marine squadrons slated for assignment aboard aircraft carriers; in the spring of 1943, work began on enlarging the station to accommodate additional air groups and improving the airfield. The runways were widened to 350 feet and the east/west runway extended to 5,900 feet, parking ramps were resurfaced and a new squadron area was provided. The stations first Air Warning Squadron AWS-8 arrived for duty in June 1943 with MAG 44 and by Sept., the enlargement of the station reached completion as Marine Air Support 51 moved aboard from Cherry Point. Three months later, as VMF-124 departed, MASG 51 and its Corsair equipped squadrons that had been training on the East Coast for Project Danny, which was the planned attack of V-1 launch sites in France with 11.75-inch Tiny Tim rockets arrived at Mojave.

After the cancellation of Project Danny, these squadrons began training for deployment aboard aircraft carriers in the Pacific; three of the squadrons were in a high state of readiness so their stay at Mojave was short; other squadrons also made a short appearance at Mojave during December of 1943 and into January of 1944, in the meantime, MBDAG 44 was redesignated MAG 44 and moved to Ewa.

During the first part of 1945, predominant squadrons present were Marine Torpedo/Bomber squadrons destined for duty aboard Navy escort carriers; by March, Mojave squadrons weren’t operating a single Corsair; instead, TBF/TBM Avengers and FF Hellcats were assigned. Mojave was an excellent training facility; the desert location provided the right flying conditions most of the time, there was non-congested airspace and nearby bombing and gunnery ranges. The downside was the occasional high winds that made flight operations difficult and unpleasant as well as the high temperatures during the summer months however, temperatures at Mojave were more moderate when compared to El Centro, Calif. The nearest town was Lancaster which was approximately 25 miles away and with a 2-day pass, trips to Los Angeles were possible; off base housing in town was in short supply and many officers traveled 20 miles to the resort town of Tehachapi to find housing.

Marine Auxiliary Air Station at Mojave encompassed a total of 2,312 acres with three runways; no outlying field existed although squadrons used the Army Air Field at Bishop for FCLPs, 2 wooden hangers and barracks were available for almost 3,000 male and 376 female personnel while civilian employees numbered around 176. Mojave was at its peak utilization during late 1944 and early 1945 with 145 aircrafts at the field. Mojave Air Station also included a swimming pool (said to be the largest in the state of California at the time) for training as well as recreation, a 90-seat auditorium hosted several USO shows including Bob Hope, Marilyn Maxwell, Frances Langford and other well knowns of the time. During the course of the war, 29 aircraft squadrons, 4 CASDs and 3 Air Warning Squadrons passed through Mojave with an estimated investment exceeding $7 million.  The Marines decommissioned Mojave Auxiliary Air Station on February 7, 1946 as the NAS was established the same day; the Navy used the station for drone operations before closing it on January 1, 1947 and for the next 4 years, the base stood in caretaker status.  The onset of the Korean Conflict found it necessary to activate Mojave again as an auxiliary landing field to El Toro on Oct. 18, 1951. On Dec. 31, 1953, Mojave was re-commissioned as a MCAAS; known for its Advance Gunnery Range, squadrons from El Toro used the facility for ordinance training and during periods of poor weather at El Toro. Mojave had no permanent squadrons assigned there, although Marine Reserve Units from across the country were deployed to the station during their 2-week summer active duty.

The following is a small time line of events at the Marine Auxiliary Station at Mojave:

Lt. Colonel John S. Holmsberg USMC was the first commander arriving at the station on Oct. 6, 1942, Marine Auxiliary Mojave Station commissioned on Jan. 1, 1943; by 1944, all tactical squadrons aboard were fighter squadrons flying the F4F Wildcat; April 1944, the Aviation Woman Reserve squadron was activated at the field with the arrival of 14 officers and 233 women; Aug. 1944; training began for both Army and Navy men on an amphibious training program dealing with air/ground support; Sept. 1944, Marine Air Group-52 came on board; winter of 1944, various carrier air groups from El Toro and Santa Barbara used Mojave to complete their training syllabus; May 1945, Colonel Frank D. Weir commanding Marine Air Group 51 departed for Santa Barbara to set up group headquarters at the station; Sept. 1945, a station "rollup" program was inititated; Mojave finally became inactive Jan. 2, 1947.

A major realignment and closing of U.S. military bases took place during the late 1950’s; the Marines closed Mojave in January of 1959 and moved to the former Vincent Air Force Base in Yuma, Arizona where they remain to this day. Since the departure of the Marines, the Mojave Airport has grown into a major testing and manufacturing center for the civilian and military aircraft industry; among the tenants are the Rutan Brothers, General Electric Aircraft and Engine Facility, Quickie Aircraft and a civilian test pilot school that caters to students from all over the world. Mojave also serves as a storage facility for airliners due to the dry desert conditions and at its peak, almost 200 airliners were stored which included brand new Boeing 747’s; Hollywood also uses Mojave for several movie locations and backdrops due to its proximity to Los Angeles.