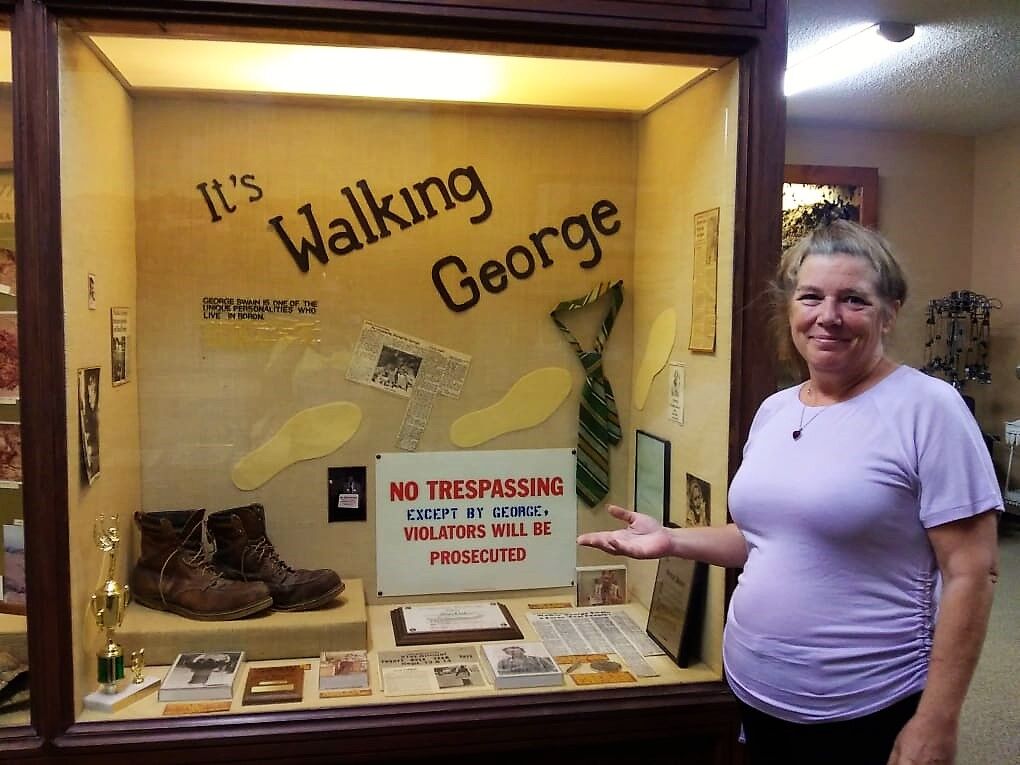 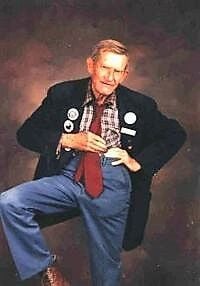 BORON – Boron is home of many things; the aerospace and Twenty Mule Team Museums, Rio-Tinto Borates and Lithium Plant and the legendary aviator “Pancho” Barnes but, did any of you know of the resident called “Walking George” and how he became a legend in Boron? As a child, I knew George on a personal level and he was one of a kind. He was generous, a genius, very kind-hearted, good spirited and loved to teach and entertain. I decided to find out a little more about George and this is the story of one man who became a legend in Boron.

George “Walking George” Swain was born on October 22, 1919 in Los Angeles, California; his father was a retired United States Marine Corps Captain and his mother loved music and taught George how to play the organ and piano. George spent his early years between Santa Monica and Glendale then the family moved to Northern California where they lived in Santa Cruz and San Jose. George attended schools in San Jose then joined the U.S. Army in 1940 where he served during World War II in the 87th Infantry; after his discharge, George enrolled at Stanford University where he took a 3-month course in chemical analysis before hiring on at U.S. Borax where he worked his entire life. George used to tell everyone in Boron that, “I arrived in Boron by train at 4 a.m. on the fourth day of the fourth month in 1944 (4/4/44)”. George never married and as a result, never had any children so everyone in Boron became his “family”. George retired from U.S. Borax in 1986 as the #3 mule where he held the title for 3 years before his retirement.

George never seemed to have/own a home or a vehicle while in Boron and it was rumored that he lived in a “hole in the desert” covering himself up with newspapers at night to keep warm; he was always scruffy-looking and wore the same clothes which was wrinkled shirts and pants and well-worn shoes (his size 14EEE hiking boots are on display at the 20 Mule Team Museum). According to a story written about George in the Los Angeles Daily News, George lived in free workers’ cabins until 1966 then continued to stay quietly in abandoned borax cabins or when the weather was cold, he would stay at the Boron Motel until 1993. He usually ate his meals (two at a time) at local restaurants or at the borax mine cafeteria and showered at the mine. George was very outspoken in his beliefs stating his positions; he also had 3 main passions which were John Muir, Conservation and Classical Music especially operas and Richard Wagner. George was also a genius in the areas of math, chemistry and music and became a part of the Boron First Baptist Church after meeting Reverend Norvall Pickett one evening outside the church; Pickett and his son were looking at the stars through a telescope when George appeared. After hearing of his talent, Pickett invited George to stop by the church and practice whenever it was open; George also played piano at the St Joseph’s Catholic Church and would call himself a “church-going atheist”. George continued to play the piano at both churches until his passing.

When he first arrived in Boron, George wasn't welcome very much; it was only after folks heard him play the piano and organ for local churches that he became “one of the family" and accepted in the community.

George met Pat and Ben Mosley in 1989 who asked him to volunteer at the LeConte Memorial Lodge for the Sierra Club in Yosemite National Park where George was re-introduced to a longtime friend named Carl Sharsmith with whom George had taken his first saunter 50 years prior. George was a member of the John Muir Memorial Association and for 25 years, he never missed the annual dinner; George was given a Lifetime Membership to the association a week before he passed away.

George was also very generous with whoever was with him often helping the helpless and hopeless; he also hated wastefulness and would be seen picking up trash and recyclables and was an avid supporter of many environmental causes.

George got his nickname “Walking George” because he was always a “one-man” entry in the annual Twenty Mule Team Days celebration in Boron and walked everywhere he went (except to the city); he also walked 30 miles to Mojave to catch a bus and loved to travel by train. George would also walk into Boron for church services, walk to work, walk 5 miles to the former Boron Federal Prison and even walked 100 miles to Death Valley for the weekend. Georges’ desire for walking is what made him famous in Boron and on his 59th birthday in 1978, a Los Angeles Times story came out about him; in May of 1979, George was featured on the then hit TV show “Real People” then returned for a reunion episode in November of 1980.

George sadly passed away at the age of 80 on April 25, 2000; its said he was found on the front porch of a house he was house-sitting by a neighbor and according to the Kern County Coroner’s Office, George died of an irregular heartbeat.