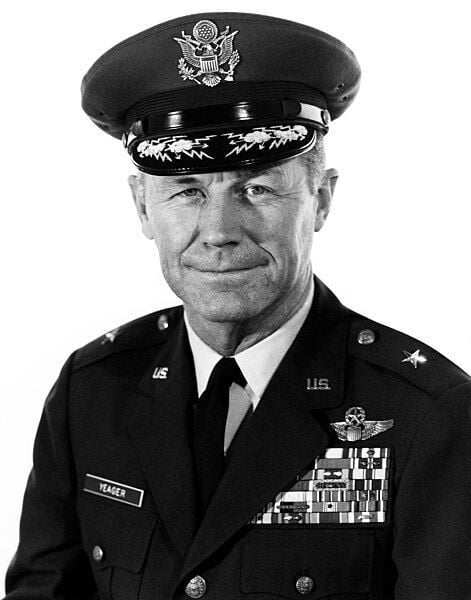 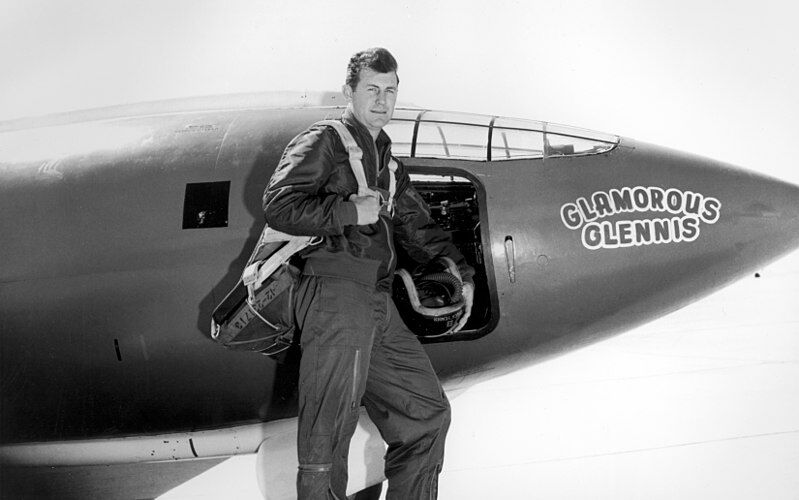 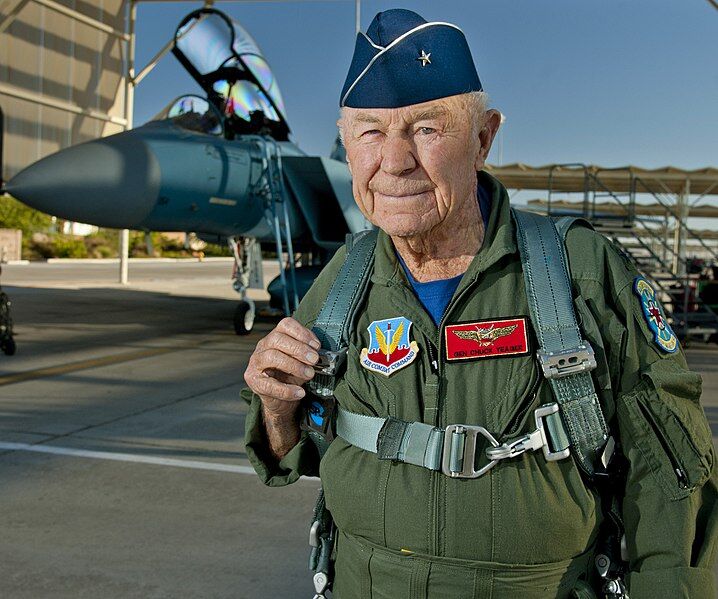 Chuck Yeager in front of the new Glamorous Glennis III which is an F-15D Eagle after he broke the sound barrier again at age 89.

Chuck Yeager in front of the new Glamorous Glennis III which is an F-15D Eagle after he broke the sound barrier again at age 89.

History has always fascinated me; all through high school I was intrigued by historical stories and events. I often wondered about the history and people around the high desert area where I grew up until I started researching it and some of its notable people. I grew up around “Pancho” Barnes and heard the name Chuck Yeager many times throughout my childhood and early adult years but never really knew much about him; I was saddened to learn of his passing in 2020, so when I decided to research the desert, I researched General Yeager as well and the following is some of the many things I found according to parts of his autobiography, Wikipedia and other references; just for the record, General Chuck Yeager is NOT related to Jeana Yeager who was one of two pilots that flew the Rutan Voyager around the world without re-fueling.

Brigadier General Chuck Yeager (his cousin Steve Yeager was a professional baseball catcher) was a United States Air Force officer, flying ace and recording-setting test pilot who became the first pilot in history confirmed to have broken the sound barrier in 1947 during level flight. General Yeager was born Charles Elwood Yeager on February 13, 1923 in Myra, West Virginia to Albert and Susie Mae Yeager. Chuck had two brothers named Roy and Hal Jr. and two sisters named Pansy Lee and Doris Ann (who was accidently shot and killed by her brother Roy while he was playing with a shotgun; Doris Ann was 2 and Roy was 6 years old). When Chuck was approximately 5 years old, the family moved to Hamlin, West Virginia where he went to school; he played basketball and football and his best grades were in geometry and typing. General Yeager graduated from high school in June 1941.

General Yeager got his first taste of the military as a teenager at the Citizens Military Training Camp which is located at Fort Benjamin Harrison in Indianapolis, Indiana during the summers of 1939 and 1940; on February 26, 1945, General Yeager married Glennis Dickhouse (who passed away in 1990) and the couple had four children.

General Yeager enlisted in the United States Army Air Forces (USAAF) on Sept. 12, 1941 and became an aircraft mechanic at George Air Force Base just outside of Victorville, Calif. in 1942; at enlistment, Yeager wasn’t eligible for flight training because of his age and educational background at the time but the entry of the United States into World War II on Dec. 7, 1941 prompted the USAAF to alter their recruiting standards. Yeager received his pilot wings and promotion to flight officer at Luke Field, Arizona where he graduated from Class 43C on March 10, 1943. After the end of WW2, General Yeager became a test pilot and flew many types of aircraft which included experimental rocket-powered aircrafts for the National Advisory Committee for Aeronautics or NACA; through this program, he became the first human to officially break the sound barrier on Oct. 14, 1947. Yeager was assigned to the 357th Fighter Group in Tonopah, Nevada where he initial trained as a fighter pilot then shipped overseas with the group on Nov. 23, 1943; while stationed in the United Kingdom at RAF Leiston, Yeager flew P-51 Mustangs in combat with the 363rd Fighter Squadron (he named his aircraft “Glamorous Glen” after his then girlfriend Glennis. Yeager was shot down over France after one victory in his first aircraft on March 5, 1944 and during his stay with the “Marquis”, Yeager assisted the guerrillas in duties that didn’t involve direct combat, he also helped construct bombs for the group; a skill that he learned from his father: it was during this time that Yeager was awarded the Bronze Star for helping a navigator named Omar M. “Pat” Patterson cross the Pyrenees. Yeager gained notoriety during WW2 while flying several missions as well as flying several different types of aircrafts. Yeager was commissioned to 2nd Lieutenant then promoted to Captain before ending his tour of duty overseas; he flew his final mission overseas on January 15, 1945 and returned to the United States in February 1945. Yeager commanded fighter squadrons and wings in Germany as well as Southeast Asia during the Vietnam Conflict and was recognized for his achievements and outstanding performances of those units.

General Yeager remained in the United States Air Force after the war and became a test pilot at Muroc Army Air Field (now known as Edwards Air Force Base and more on the base in a later story) following his graduation from Air Material Command Flight Performance School.  The USAAF selected Yeager to fly a rocket-powered Bell XS-1 in the NACA program to research high-speed flight after Chalmers “Slick” Goodlin who was a test pilot himself demanded $150,000 to break the sound barrier; two days before his record-breaking flight, Yeager broke two ribs when he fell off a horse he was riding and according to Yeager, he went to a doctor in nearby Rosamond, Calif. where his ribs were taped so he could make the flight. On the day of the flight, Yeager was in so much pain the he couldn’t close the X-1 hatch by himself so a fellow project pilot named Jack Ridley rigged up a device so Yeager could seal the hatch of the aircraft. On Oct. 14, 1947 Yeager broke the sound barrier in level flight piloting Glamorous Glen at Mach 1.05 and an altitude of 45,000 feet above Rogers Dry Lake yet his record-breaking flight wasn’t announced to the public until June of 1948. Yeager was awarded the McKay and Collier trophies for his flight; he was also awarded the Harmon International trophy in 1954. The X-1 Yeager flew the day he broke the sound barrier is on permanent display at the Smithsonian Institutions National Air and Space Museum. Yeager went on to break several more altitude and speed records during his lifetime.

In 1962, Yeager was promoted to Colonel after completing a year at the Air War College; he also became the first commandant of the USAF Aerospace Research Pilot School which produced astronauts for NASA and the United States Air Force after its redesignation from the USAF Flight Test School. Yeager flew with Neil Armstrong for the only time in a T-33 to evaluate Smith Ranch Dry Lake in Nevada for use by the Air Force as an emergency landing site for the X-15.

Yeager completed five flights in the NASA M2-F1 between 1963 and 1964. A flying accident in Dec. 1963 during a test flight put an end to his record-breaking attempts. Yeager commanded several missions throughout his career; in 1966, he took over command at Clark Air Base in the Philippines, 1968 saw him take command at Seymour Johnson Air Force Base in North Carolina; Yeager was also assigned to Pakistan, West Germany, Vietnam, Korea and many other areas around the world. Yeager was promoted to Brigadier General in July 1969 and assigned as Vice-Commander of the Seventeenth Air Force; Brigadier General Yeager retired from military life on March 1, 1975.

Brigadier General Yeager made an appearance in the Tom Cruise movie “The Right Stuff”; playing bartender Fred at “Pancho Barnes Place”. Yeager commented, “If all the hours were ever totaled, I recon I spent more time at her place than in a cockpit over the years”. During the 1980’s, Yeager was connected to General Motors publicizing their AC Delco products; in 1986, Yeager drove a Chevrolet Corvette pace car for the 70th running of the Indianapolis 500 and was appointed by President Ronald Reagan to the Rogers Commission (investigated the space shuttle CHALLENGER explosion), in 1988 where he drove an Oldsmobile Cutlass Supreme which was the pace car for the Indianapolis 500.

In 2000, General Yeager met then actress Victoria Scott D'Angelo on a hiking trail in Nevada County; the two hit it off and were married in August 2003 in spite of a dispute between D'Angelo, Yeager and his children. They claimed that D"Angelo married Yeager for his fortune and in turn, Yeager accused his children of diverting millions of dollars from his assets; litigations ensued and in August 2008, the California Court of Appeals ruled in favor of Yeager finding that his daughter Susan had "breached her duty as trustee".

General Yeager went on to live out the rest of his years in Northern California with his wife and passed away on Dec. 7, 2020 (Pearl Harbor Remembrance Day) in a Los Angeles hospital at the age of 97.